Man, 51, suffers amputation of all five fingers on his right hand after injecting himself with three crushed morphine tablets during an ‘abstinence crisis’

A Brazilian drug addict was forced to get five fingers amputated after injecting himself with crushed morphine tablets.

The 51-year-old man rushed to the hospital in ‘severe’ pain barely an hour after administering the three pills into his right forearm.

Doctors in Brasilia, the capital of Brazil, gave him anesthetic — but found the fingers above the injection site were already cold and had turned blue.

Meanwhile, the patient’s forearm began to swell leaving doctors with no option but to cut it open to drain the fluid.

The man was then rushed to the intensive care unit after it emerged damaged muscles had released bits of proteins into his blood.

When this happens — in a condition known as rhabdomyolysis — it can be fatal because the shards may damage the heart and kidneys. Doctors said the man also needed kidney support.

Ten days after he was admitted to hospital, all five fingers on his right hand were amputated. The patient — who was also described as an alcoholic — was discharged after four days, but returned later for reconstructive surgery on the stump. 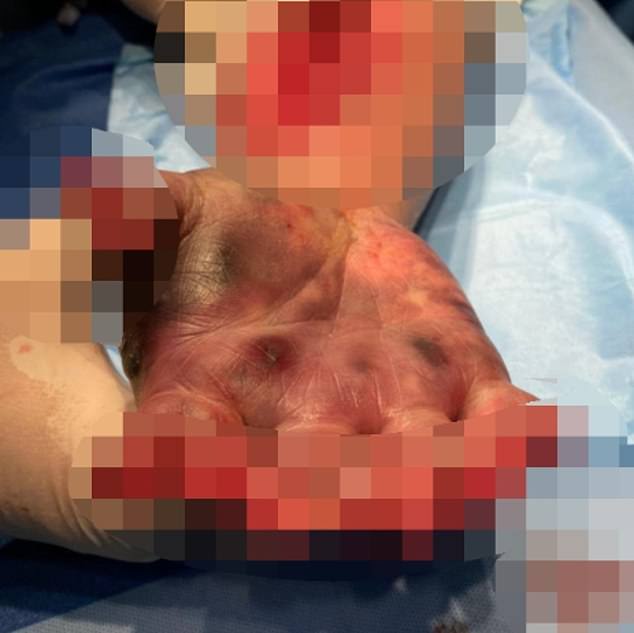 A drug addict and alcoholic had all five fingers on his right hand amputated after injecting himself with three crushed morphine tablets. Pictured above is the hand after the injection 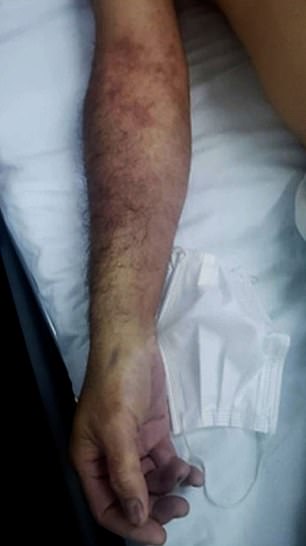 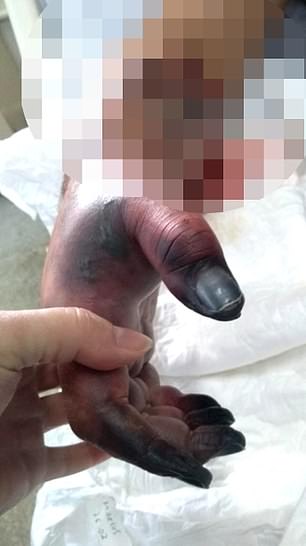 He was rushed to hospital in Brasilia, the capital of Brazil, where doctors gave in anesthetic. But they noted that his hand had already turned blue and was cold after admission (Pictured left and right before the fingers were amputated) 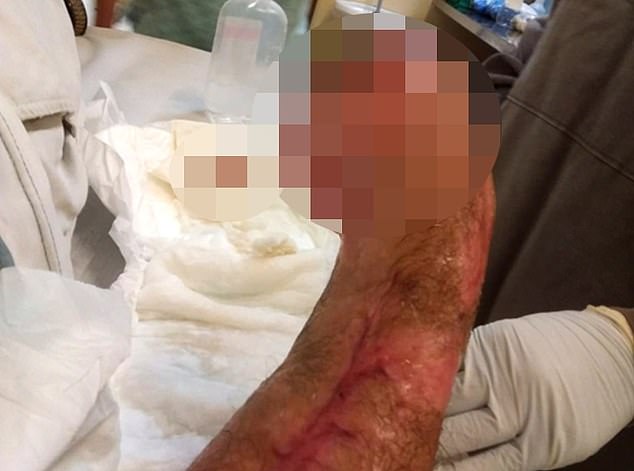 The Brazilian tale was revealed by doctors writing in the American Journal of Case Reports.

Morphine is a strong painkiller administered as a tablet or through an injection, and is most often used after major surgery or for cancer patients.

But the drug is highly addictive, and classed as a Schedule II in the U.S. — putting it with the likes of fentanyl and cocaine.

The Centers for Disease Control and Prevention does not publish figures on the number of deaths due to morphine every year, but the agency reported a record 80,000 opioid deaths from November 2020 to 2021.

While opioid abuse is a major problem in the U.S., many Latin American countries like Brazil do not face as high levels of drug misuse, researchers from Simon Fraser University found in a study published last year.

Mauro Passos, a cardiologist at the University of Brasilia, said they used thermal cameras to determine that the fingers needed to be amputated.

They wrote that the patient had injected the three crushed pills into himself during an ‘abstinence crisis’.

Doctors also suggested the pills had contained impurities which damaged the lining of his arteries, cutting off blood flow to the fingers.

They said that the artery in the hand had been ‘obliterated’ following the injection.

A drug addict watched his penis turn black and start to rot after injecting it with cocaine.

The 35-year-old Hispanic man showed up at hospital with ‘excruciating’ pain three days after the injection.

Doctors in the Bronx, New York, found the skin on the unidentified man’s penis had died, turned black and was releasing a ‘foul-smelling’ discharge.

The skin around his scrotum was also beginning to rot and peel away from the base of his penis.

The patient admitted injecting cocaine into the dorsal vein which runs along the top of the shaft, although he did not say why.

He ‘slowly’ improved after being put on an antibiotic drip for five days. Doctors then gave him a ten-day course of pills upon discharge.

They said the patient ‘refused’ to go to rehab for his drug abuse and was later ‘lost to follow-up’. It is not clear if he made a full recovery.